The office according to “The Office”

Expectations when reading The Gervais Principle

A sneak peak into why offices are the way they are. 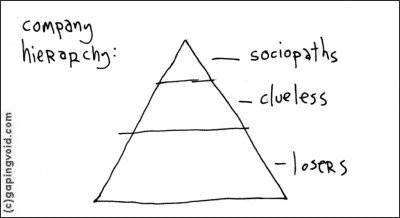 The author breaks down the people of an organization into the three categories:

The losers aren’t losers in a social sense. They are losers because they struck a bad bargain. If a loser over performs, he has to be clueless(and henceforth promoted to middle-management). Because he has made a bad bargain into a terrible bargain.

The sociopaths use the clueless as a buffer between themselves and the losers.

Each of the categories have different struggles, strengths, and weaknesses.

The sociopath struggles with meaning. He gets meaning from creating meaning for the clueless and the losers. But the main crisis of the sociopath is always a nihilistic one.

The Loser’s struggles are mostly social ones. Fitting into the group.

“So why is promoting over-performing Losers logical? The simple reason is that if you over-perform at the Loser level, it is clear that you are an idiot. You’ve already made a bad bargain, and now you’re delivering more value than you need to, making your bargain even worse. Unless you very quickly demonstrate that you know your own value by successfully negotiating more money and/or power, you are marked out as an exploitable clueless Loser.”

Bureaucracies are structures designed to do certain things very efficiently and competently: those that are by default in the best interests of the Sociopaths

They are also designed to do certain things incompetently: those expensive things that the organization is expected to do, but would cut into Sociopath profits if actually done right.

Sociopaths design the system this way because they are only interested in building an organization that lasts long enough to extract the easy value from whatever market opportunity motivated its formation.

Not a clear cut set of rules. Most people are a mix of the different “categories” but do have a dominant one.